Translation: Unite the Proletarian Revolutionaries, Seize the Power of the Capitalist Roaders! 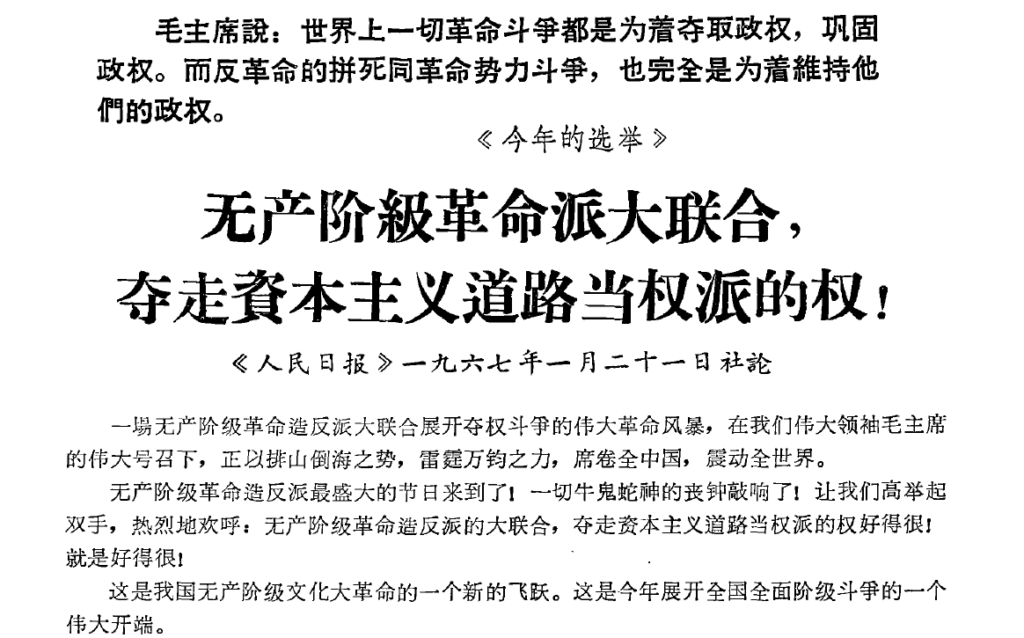 “Unite the Proletarian Revolutionaries, Seize the Power of the Capitalist Roaders!,”

This is great leap of our country’s Great Proletarian Cultural Revolution. This year is the beginning of a countrywide complete class struggle.

This is the international communist party movement’s pioneering work, something that has never happened before in history. It is a great thing which bears upon future of the world and destiny of humankind.

The revolution is all about political power. The victory of people’s democratic revolution in our country has become that the whole country’s proletariat has seized power. But as to the beaten down class enemies, their soul is still alive, their hearts are not defeated. In teams of the proletariat and small producers, there are bound to be some new capitalist classes. The struggle between the proletariat and the capitalists is intensely continuing. The Great Proletarian Cultural Revolution is focused on taking back power from a small group of capitalist roaders inside the party and mobilize the masses to emancipate themselves. Only by opening up this kind of great mass movement, opening up a large group completely to class struggle, can we finally solve the proletariat’s problems and the problems of the dictatorship of the proletariat.

We must seize every form of power that the representatives of the capitalist classes grasp! This vast, revolutionary group has gone through months of struggle, and grasped the true greatness of Marxist-Leninist ideology, and Mao Zedong thought.

Why are the revolutionary Leftists that answered Chairman Mao’s great call, their hearts filled with unlimited loyalty for the cause of the proletariat, when they took their first shot aimed at the capitalist roaders in positions of authority, were branded “counterrevolutionary”, and “rightist elements”?

Why after the “working teams” showed up, the revolutionary Leftists not only haven’t been exonerated, but instead suffered the intensified cruel repression of White Terror?

Why when the vast revolutionary masses exposed and criticized the bourgeois reactionary line, there was another larger mass on mass struggle, even to the point of violence and bloodshed, with any number of daring revolutionaries attacked, persecuted, expelled, and suppressed until recently, as a part of another large counteroffensive by the bourgeois reactionary line along with a flood of antirevolutionary economism?

Months of twists and turns, one terrifying wave of class struggle after another, have deeply educated the vast revolutionary rebel faction. They have gradually come to understand: there is only one reason why the revolution has been thwarted, because power is not in their own hands. And the reason why a small handful of bourgeois characters are able to behave savagely and bully others is because they still have power! The revolutionary masses should seize their own destiny, which at the end of the day means they should seize power. To possess power is to possess everything; to lack power is to lack everything. There is nothing more important than seizing power! So, revolutionary masses, cultivate profound hatred towards your class enemies and make a firm resolution: join forces, unite, and seize power! Seize power!! Seize power!!! Any power of party, government, wealth that has been usurped by the revisionists and die-hard bourgeois reactionaries must all be retaken! The fate of the Dictatorship of the Proletarian, the fate of the Great Proletarian Cultural Revolution, the fate of the Socialist Economy, must be firmly seized in their own hands! They said it well: the proletarian revolutionaries, true Leftist revolutionaries, envision the seizure of power, think about the seizure of power, and work for the seizure of power! This is not some kind of “personal ambition,” rather it is seizing power for the proletariat, seizing power for communism, and making the great Mao Zedong Thought occupy every position!

It is the decisive battle between the proletariat and the bourgeoisie for the earth-shaking proletarian revolutionary rebel faction unity to carry out a mass movement to seize power. It will inevitably concentrate the eruption of class contradictions and bring about a violent storm of unprecedented scale. In anticipation of the realization of this decisive battle, a scene of extremely excited popular feelings is already unfolding before our eyes.

Look! That small handful of counterrevolutionary revisionist elements is scared to death of the revolutionary rebel faction great alliance seizing the power of the capitalist roaders and the die-hard bourgeois reactionary line. Because seizing power means depriving them of their lifeblood, depriving them of “seek opportunity to retaliate,” their last trick. They are seized with panic, flying into a rage, broken into hysteria. However, all of the counterrevolutionaries are helplessly in their death throes, and they are speedily being submerged in the mighty torrent of the revolutionary rebel faction great alliance’s seizing of power.

As every single member of the proletariat revolution will say, this brings about true delight.

The proletariat revolutionary rebel faction needs to expand its struggle for power, which can only be done through a great alliance. If there is no great alliance, it will become a meaningless word to seize the power of the capitalist roaders. A hundred years ago, Marx and Lenin in the Communist Manifesto called upon “the world’s proletariat to band together and rise up!” as a call to battle, for the sake of the proletariat in their first struggle for power. This call to arms caused the capitalist of the old world to shake with fear. Forty years ago, our great leader Mao Zedong raised “the Great Alliance of the Masses” as a great appeal, which served as our country’s People’s Republic revolutionary marching call. Today, with the new direction our country’s Cultural Revolution, the millions of revolutionary masses follow Mao Zedong’s great new appeal, “The Great Alliance of the Revolutionary Proletariat must rid capitalism of all its power,” which has caused a great stirring amongst the masses to enter into battle. This is the indication that to the Party’s few capitalist roaders who support capitalism and headstrong fanatics in obstructing us, their day of judgment has arrived.

“Ask the vast earth who is master of life’s changes?” “We are! WE ARE!! We the numerous masses of farmers and workers are masters of the new world!” This is the resounding voice of the vast revolutionary masses!

The Great Coalition must take shape through the seizure of power. Coalition must make a clear-cut stand. It is the revolutionary rebel faction’s coalition, and not some hodgepodge of loose affiliates. Eclecticism, reformism, small-group mentality, factionalism, decentralism, separatism, these things must be brought down.

In the proletariat revolutionary coalition, during the high tide of seizing the power of the ruling authority of capitalism, there are a few diehard bourgeoisies that will inevitably disguise themselves, sharpen their minds, and strive to burrow into the ranks of the revolutionary coalition. They falsely carry the flag of “revolutionary rebel,” and seize power from the proletariat. They are accustomed to spreading rumors, causing mischief, confusing right and wrong, inciting the masses, misdirecting the struggle against the revolutionaries, the proletariat dictatorship, and the proletarian revolutionary headquarters. We must abide by Chairman Mao’s instruction, heighten our state of alertness, keep our eyes open, distinguish between friends and foes, discern right from wrong, expose all of their cunning machinations, and resolutely fight back!

” So many deeds cry out to be done, And always urgently; The world rolls on, Time presses. Ten thousand years are too long, Seize the day, seize the hour! ” Revolutionary comrades, under the guidence of the proletariat revolution route with Chairman Mao as the represent, let us rise up together to achieve our great coalition! Let us expose the small number of capitalists within the party, and take down the diehard bourgeoisie who have yet to give up! We must scour every nook and cranny in the whole country, and be victorious in the great historical task that Chairman Mao has bestowed upon us.

If the enemy will not surrender, then we will put them out like a fire!

The proletariat revolutionary coalition, seize the power of the capitalist roaders!